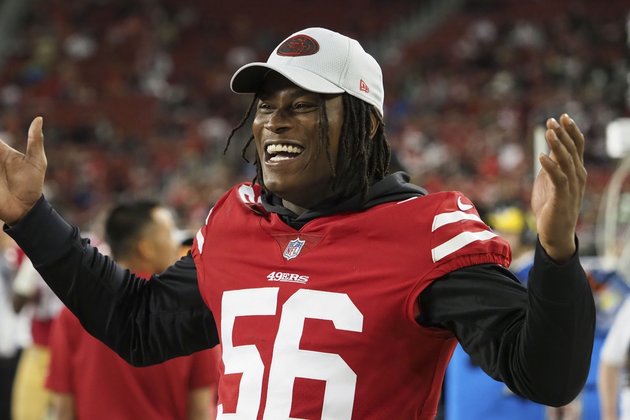 A little over a week after the San Francisco 49ers released linebacker Reuben Foster due to an arrest for domestic abuse, his former girlfriend told her side of the story.

During an appearance on ABC's "Good Morning America" on Thursday, Elissa Ennis said Foster slapped her and pushed her during an incident in Tampa, Florida. In the interview, Ennis said Foster abused her three times and also accused the 49ers of interfering with the police investigation in the latest incident.

The most recent incident took place Nov. 24 before the 49ers faced the Buccaneers. Foster was charged with one count of first-degree misdemeanor domestic violence.

The 49ers cut Foster on Nov. 25 before their 27-9 loss at Tampa Bay and he was claimed off waivers by the Washington Redskins two days later. Foster is currently on the NFL's Commissioner Exempt list, meaning he cannot play or practice.

Foster was suspended by the NFL for two games at the start of the season following an arrest for misdemeanor marijuana possession in January in Tuscaloosa, Ala. During a Feb. 11 arrest he was charged with possession a loaded rifle, which was discovered on his bathroom floor. He pleaded no contest to a misdemeanor weapons charge and was ordered to perform 232 hours of community service.

One of the original red flags on Foster occurred during the NFL's Indianapolis draft combine in 2017. To that point, the All-American Alabama star was rated as the No. 1 inside linebacker and was listed as high as No. 7 overall by many, including NFLDraftScout.com.

He was asked to leave the combine after becoming loud and obnoxious with the medical staff while awaiting a drug test. It turned out he submitted a diluted urine sample and post-combine reports indicate he flunked the test. Due to the combination of his actions and the drug test, he was pushed down many draft lists -- and off some.

--Landon Collins, who is a free agent after the season, will miss the rest of the season after the New York Giants placed the safety on injured reserve.

Collins will undergo surgery to repair a partially torn rotator cuff and it will require an estimated four to six months of recovery time.

Collins was injured in last week's 30-27 overtime win over the Chicago Bears. He missed 11 snaps, returned to the game and further testing determined the severity.

Collins has recorded a team-leading 96 tackles and one forced fumble through 12 games this season. The 6-foot, 222-pound Collins has collected 437 tackles, eight interceptions and four sacks in 59 career contests since entering the league as a second-round pick by the Giants from Alabama in 2015.

Collins is in the final year of his contract and is eligible to become a free agent in 2019, unless the Giants designate him as a franchise player or sign him to a contract extension ahead of the league's new calendar year.

Smith is battling an infection that resulted from surgery to repair a broken fibula and tibia that he suffered in a loss to the Houston Texans on Nov. 18, the NFL Network reported, citing sources.

The Redskins released a statement Thursday asking for privacy on behalf of Smith and his family as unconfirmed stories started to circulate on social media about the severity of the infection.

After the statement was issued, Redskins coach Jay Gruden was asked about Smith.

Smith suffered the two broken bones in his leg in the second half against Houston after he was sacked by the Texans' Kareem Jackson and J.J. Watt. As Smith rolled over, his ankle was dangling awkwardly.

The 34-year-old Smith was in his first season with Washington after he was acquired in an offseason trade with the Kansas City Chiefs. He finished the season with 2,180 yards and 10 touchdown passes against five interceptions.

The No. 1 overall pick of the San Francisco 49ers in the 2005 NFL Draft, Smith played his first seven seasons in the Bay Area before joining the Chiefs in 2013.

Smith was a Pro Bowl selection in three of his five seasons with Kansas City, guiding the team to a 50-26 record and four postseason berths.

For his career, Smith has amassed 34,068 passing yards with 193 touchdowns and 101 interceptions. He had his finest season with the Chiefs in 2017, establishing career highs with 4,042 yards and 26 scoring passes.