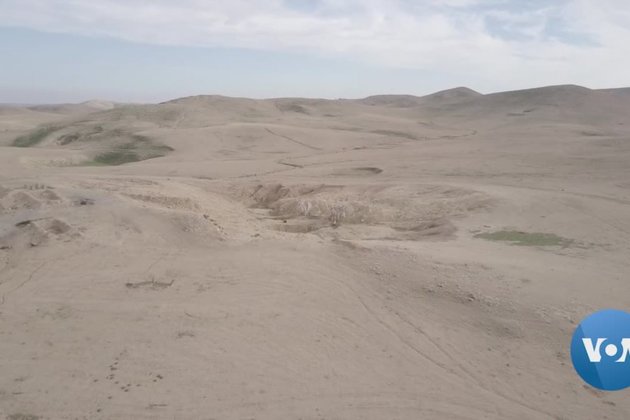 MOSUL, IRAQ - In the desert outside Mosul there is a giant sinkhole, once thought a natural wonder, with stories about it going back for generations.

There are believed to be as many as 10,000 or more bodies decomposing inside, unceremoniously dumped by Islamic State militants, after or during the killings.

And as Iraq marks the first anniversary of its victory over IS, this area is still strewn with so many bombs that authorities do not expect to recover those remains soon, if at all.

But in places formerly controlled by IS, locals say they are more worried about their future than the past. Militants may have lost almost all of their territory, but attacks continue and residents fear the group will once again rekindle its campaign of all-out violence.

"We know where the explosives are, so we are not afraid of them," explains Sarhan, a 15-year-old shepherd who guides us toward the sinkhole. "But we are afraid of militants coming back, so we have guns now."

Last year, the military banned civilians from coming here after people were killed by the bombs buried in the dirt. But residents like Sarhan remain in their homes and soldiers ask him to show us which paths are safe.

Another shepherd guides his flock through a stream as we walk. The bones of militants killed more than a year and a half ago lie scattered in the mud.

"Why has nobody gotten rid of these bodies?" I ask.

"What? It's a crime to bury the bodies of terrorists," the man says, moving his sheep along.

On average, IS has conducted 75 attacks a month in Iraq in 2018, claiming more than 1,500 civilian lives, according to new report by the Center for Strategic and International Studies, a Washington-based research group.

The death toll is considerably less than in 2017, when IS still held physical territories, but the group appears to be refocusing its efforts on government targets, the report says.

Iraqi security forces are conducting near-daily operations to thwart these attacks, capturing and killing fighters as well as launching airstrikes, including a cross-border offensive in neighboring Syria that killed 40 militants last month, according to the Iraqi military.

At his base in Mosul, Major-General Najm al-Jabouri says that while they are still fighting, Iraq is much safer than it was last year. But extremist ideas, he says, cannot be eradicated by force.

"They don't have much power, but their ideas still exist," he explained. "God willing we will finish them."

But in the year since the victory, some crucial elements of establishing a long-term peace have not been addressed, adds the CSIS report. Entire neighborhoods remain flattened and sectarian tensions have increased.

In war, Sunni, Shia, Kurds and Arabs stood together against IS, but since then relations have deteriorated, taking attention and resources away from recovery. Continued attacks and the memory of IS savageries feeds the sectarianism.

"This was a nice place," says Fatima, a 77-year-old mother of 12 in a village near Khafsa. "But those dogs came in and ruined it all for us."

Three of Fatima's sons were killed by militants and another was kidnapped, destroying her family's financial future. This kind of violence has left yet another schism in Iraqi society, with the families of IS fighters mostly still languishing in camps, unable to go home.

A block from her home, the word "Daeshy," meaning IS militant, is scrawled on a burned-out house. If the wife or the children of the IS militant that once owned that home wants to return, they are clearly not welcome.

In Mosul, once the de-facto capital of IS in Iraq, locals say when Iraqi and coalition forces retook the city they were relieved. They had endured three years of extremist rule, a bombing campaign and months under siege.

If nothing else, they were safe. But in the year and a half since the battles subsided in the city, long-term safety has become more and more questionable.

And recent car bombings at a restaurant here and in the western city of Tikrit have shattered the illusion that attacks are limited to remote areas where IS can still operate. At a cafe in the Jadida neighborhood, where airstrikes killed hundreds of civilians on a single day last year, workers say the bombing of a nearby restaurant last month shocked the neighborhood.

Mosul is also still reeling from the war, with reconstruction largely in the hands of individual home and business owners, and entire districts are still in piles of rubble. Widespread disillusionment with the government, isolation and extreme poverty are often among the key reasons IS was able to take and hold Iraqi territory in the first place.

Officials in Mosul say rebuilding the hospitals, bridges and other major infrastructure projects will require billions of dollars, and funding from the central government has been slow and vastly lacking.

"There is so much to take care of after the war," says Mosul Mayor Zuhair Mohsen al-Araji in his office. "And we get very little support from Baghdad."

"Why don't they give the money?" asks one reporter, as he turns his microphone off. "Is it about corruption or they just don't care?"