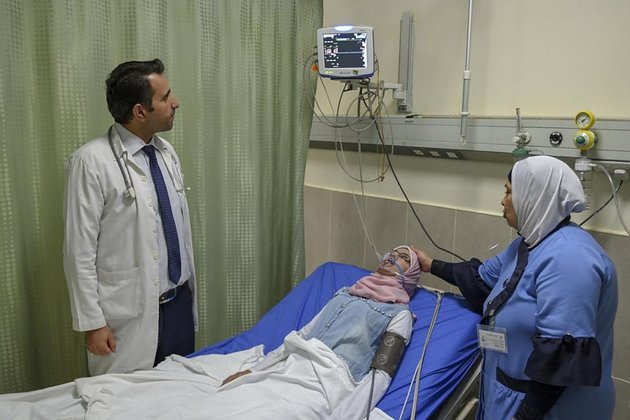 Born with a congenital heart defect that starves her body of oxygen, leaving her desperately weak and tinging her pale skin blue, 24-year-old Syrian refugee Walaa is no stranger to hospitals.

Three years ago, when her family finally fled central Syria amid fierce airstrikes after two years of internal displacement, the arduous journey to safety in Jordan left her so exhausted that she was rushed to the emergency room the moment they crossed the border.

Since then she has required regular check-ups at the local government hospital in Zarqa, a city 25 kilometres northeast of the capital Amman where the family now lives. But earlier this year, a sharp hike in medical costs for Syrian refugees forced Walaa to start taking dangerous risks with her health.

"My daughter's condition needs to be treated at a hospital, but we can't afford these costs every time," explained her mother Rima, 45. "'In the past we used to pay just a small fee at the hospital, but now we are paying a lot."

Jordan is home to more than 673,000 registered Syrian refugees, many of whom arrived during the early stages of Syria's deadly conflict, now in its eighth year. In addition to them, some 86,000 refugees of other nationalities, including Iraqis, Sudanese, Yemenis and Somalis are currently hosted within the Kingdom.

The financial burden of hosting so many refugees for so long has placed a huge strain on the country and its infrastructure, including public hospitals and clinics. After years of offering health services to Syrian refugees at a generous subsidized rate, last February, the government was forced to increase the fees at Ministry of Health (MoH) facilities, pushing up costs by up to five times their previous level.

No longer able to afford the regular hospital check-ups Walaa needed, the family started visiting a local doctor to prescribe medication directly in an effort to economize. But the risks of this approach were laid bare when she recently went to the hospital for her first proper check-up since the costs went up.

Tests revealed that oxygen levels in her blood were dangerously low and she had developed a chest infection, and she was admitted to a specialist care unit overnight. "After the doctors checked her today, they said she must always be monitored at a hospital," Rima explained.

Zarqa Hospital's Financial Manager, Sanaa Albalbisi, said the cost of an emergency check-up had risen from less than half a Jordanian Dinar (US$0.7) to JOD6.40 (US$9), with x-rays and blood tests often pushing the total up much higher. This increase has had a noticeable impact on the number of Syrians visiting the hospital, she added.

"The change in costs has decreased the number of Syrians who come to emergency because they now have to pay more money, and as refugees, they can't afford the costs," Albalbisi said.

More than 85 per cent of Syrian refugees in towns and cities across Jordan live below the poverty line on less than US$3 per day. With many families struggling simply to secure adequate food, water and shelter, few can afford to meet the additional medical costs.

As a result, UNHCR, the UN Refugee Agency, has scrambled to try to fill the gap and provide additional funding to ensure refugees get the basic health care they need. The agency has tripled its requested health care funding for 2019 to US$65.5 million for Syrian refugees, plus a further US$4.8 million for non-Syrians. In parallel, UNHCR has stepped up its advocacy with development actors to support long-term MoH needs.

According to Dina Jardana, Assistant Public Health Officer for UNHCR Jordan, Walaa's experience is part of a wider and potentially harmful trend among Syrian refugees following the change in policy on health care costs.

"The case of Walaa is a clear example where the policy has caused refugees to minimize their number of trips to the Ministry of Health facilities because of the increased costs," Jardana said. "This has impacted her life, reaching the stage where she needed emergency hospital admission."

For Walaa, while the cost of her overnight admission will be covered by UNHCR, she still worries that her family cannot afford the regular check-ups that she used to take for granted, and fears what impact this will have on her health.

"I do not like to make my family pay any expenses, because they have lots of other responsibilities like the rent of the house and the bills, and our financial situation is bad," she said.

"I can't live like ordinary people, like those who run, walk... I can't do any of this," she added. "I hope to be recover from my illness and not feel tired again and live like any healthy girl."