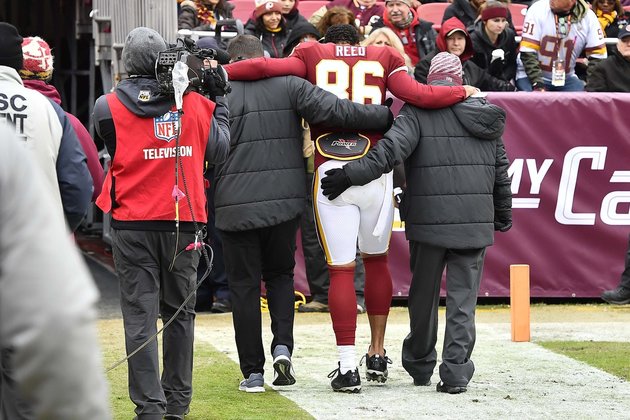 Jordan Reed's availability for the remainder of the season is in jeopardy after the Washington Redskins tight end sustained a strained big toe.

Coach Jay Gruden said Reed would miss at least one week, although there's a chance he'll sit out the final three games for the reeling Redskins (6-7), who have dropped four in a row.

Gruden said it's not the same toe strain that hindered the 28-year-old Reed the previous two years and required surgery on both big toes after the season.

"There's a level of concern," Gruden said. "It's a pretty good strain on (his) big toe and obviously with the amount of cutting that he does we'll see if it's one week, two weeks or the rest of the year. We're not sure yet."

Reed was injured during the first quarter of Sunday's 40-16 loss to the New York Giants.

He has collected 329 catches for 3,371 yards and 24 touchdowns in 65 career contests since being selected by Washington in the third round of the 2013 NFL Draft.