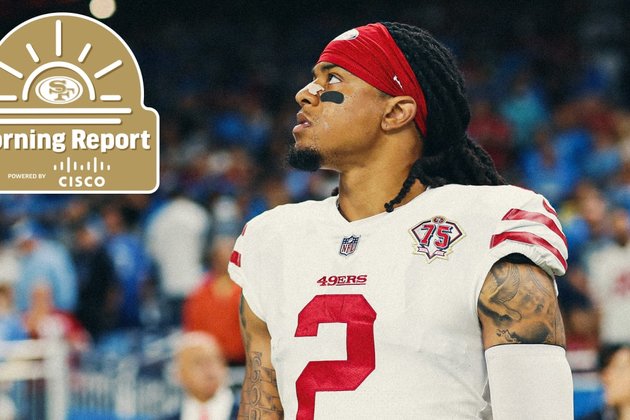 Here are the top 49ers headlines for Tuesday, September 14.

Following the San Francisco 49ers Week 1 win over the Detroit Lions, Kyle Shanahan joined his team in the locker room postgame and posed the question, "how does everyone feel after the win?"

For one, the team, who had as large as a 28-point lead, allowed two touchdowns within two minutes of each other late in the fourth quarter, threatening San Francisco's impending victory. But the toughest pill for the locker room to swallow after the game, even more so than the unsettling win, was the loss of veteran cornerback Jason Verrett.

On Monday, Shanahan confirmed the news of an ACL tear for the cornerback, a heartbreaking season-ending injury for Verrett, who has battled through injuries throughout his NFL career.

The 49ers were without Emmanuel Moseley in Detroit as the corner has been working through a knee injury. Shanahan is expecting the corner to return "soon" and said he's "holding out hope" he will be available on Sunday.

Raheem Mostert appeared in just four snaps on offense before leaving Sunday's game with an apparent knee injury. According to Shanahan, Mostert suffered a chipped knee cartilage which will sideline the running back for eight weeks. Mostert was off to a hot start against the Lions in the 49ers second drive, posting two gains of 11 and 9 yards, respectively, en route to San Francisco's first score of the game.

Who Were the 49ers Top Performers in Week 1 Win vs. Lions?

The San Francisco 49ers were flying high for most of their Week 1 matchup against the Detroit Lions. A fourth quarter score followed by a successful onside kick by Detroit quickly threatened San Francisco's once 28-point lead in the season opening matchup.

San Francisco's defense managed to hold off Detroit in the final :20 seconds of the game to maintain their lead and close out the day with a win.

Jeff Deeney of Pro Football Focus highlighted several 49ers who were key to the team's victory over the Lions. Here's a look at Sunday's top performers:

The Bay Area Sports Hall of Fame (BASHOF) Class of 2021 Enshrinement presented by Alaska Airlines and in partnership with KNBR 680, NBC Sports Bay Area and California, the San Francisco 49ers and the San Francisco Giants, will be held on Monday, October 4 at Oracle Park. The Class of 2021 inductees include Bruce Bochy, Rickey Henderson, Natalie Coughlin, Bryant Young and Paul Cayard.

The change in venue to Oracle Park will allow for an outdoor event and provide an opportunity for the public to watch the ceremony from the lower box seats. Ticket prices are $75 and $250 and can be purchased online. Tickets at the $250 price are limited and include a pre-ceremony reception and seating in the first two rows of the lower box seats closest to the field. A portion of the proceeds will benefit Special Olympics Northern California.

Learn More and Get Tickets >>>