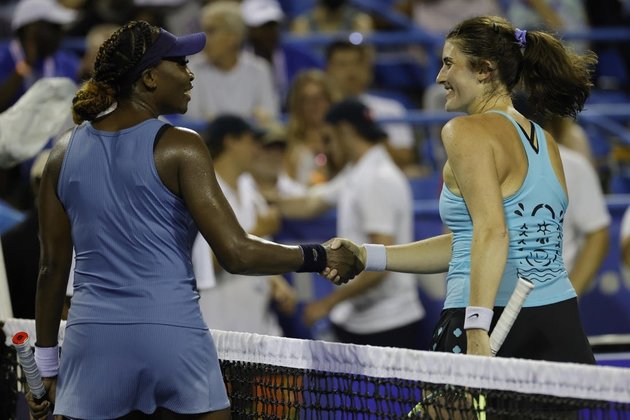 Venus Williams returned to singles action for the first time in nearly a year on Monday, but she immediately fell at the Citi Open in Washington.

Canadian qualifier Rebecca Marino rallied past Williams 4-6, 6-1, 6-2 in first-round action. Marino, 31, is ranked 111th in the world, while Williams, 42, is currently unranked due to her long absence.

Williams hadn't played singles on tour since last August in Chicago. The rust showed on her serve as she racked up 13 double faults and just three aces. Marino had 10 aces and two double faults.

Eighth-seeded Karolina Pliskova of the Czech Republic rallied to beat Great Britain's Katie Boulter, 1-6, 7-6 (5), 6-3 in the first round at San Jose, Calif.

After dropping the first set, Pliskova went up 5-1 in the second set but twice lost games while serving for the set. After claiming the tiebreaker to level the match, Pliskova got through a rocky third set that featured five service breaks.

Three U.S. players, Amanda Anisimova, Madison Keys and Taylor Townsend, won their opening matches. The night session was due to feature seventh-seeded Daria Kasatkina of Russia against Elena Rybakina of Kazakhstan plus an all-U.S. matchup of Elizabeth Mandlik and Alison Riske-Amritraj.