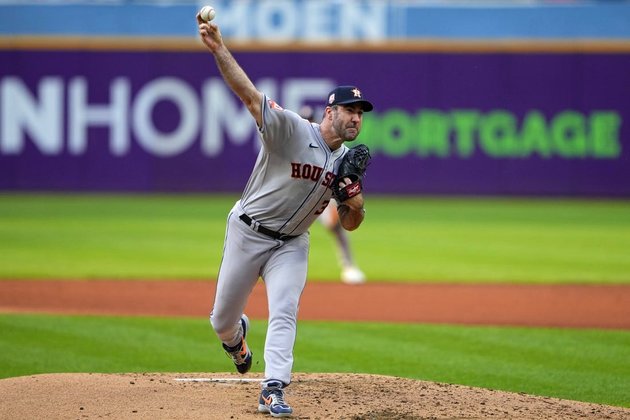 Justin Verlander allowed just two hits over six scoreless innings to record his major-league-leading 15th win, lifting the visiting Houston Astros to a 6-0 victory over the Cleveland Guardians on Thursday.

Verlander (15-3) struck out five batters and walked one en route to lowering his majors-best ERA to 1.73. The two-time American League Cy Young Award recipient has allowed one earned run or none during each start of his seven-game winning streak.

Houston's Chas McCormick and Martin Maldonado each belted a solo homer and drove in three runs. McCormick, who finished with three hits, served as the Astros' right fielder with Kyle Tucker sitting out due to a non-COVID illness.

Maldonado, Jeremy Pena and Jose Altuve each had two hits as the Astros earned their fifth win in eight games.

The Guardians mustered just three hits en route to losing for the third time in four meetings with Houston this season.

Houston's Yordan Alvarez singled to lead off the third inning and advanced to third base following a two-out throwing error by third baseman Jose Ramirez. McCormick's infield single up the middle allowed Alvarez to cross the plate to open the scoring.

McCormick's RBI single in the fifth inning gave Houston a 2-0 and chased Zach Plesac (2-10). Nick Sandlin stepped in and retired one batter before Maldonado's double down the left field line scored both Aledmys Diaz and McCormick.

That closed the book on Plesac, who lost his third straight start and sixth consecutive decision after permitting four runs on seven hits in 4 1/3 innings. He walked five and fanned four.

McCormick gave the Astros a 5-0 lead in the seventh inning, depositing an 0-2 fastball from Kirk McCarty over the wall in right field. The homer was McCormick's 11th of the season.

Maldonado added his 11th homer of the season two batters later. He sent an 0-1 fastball from McCarty over the wall in center field.

Astros relievers Will Smith and Ryne Stanek bridged the gap to Phil Maton, who retired the side in the ninth inning to end the game.

Tampa Bay quarterback Tom Brady was excused from Thursday's practice and plans to be away through the weekend for personal ...

Starting quarterbacks are mastering the sideline route this preseason. Bills quarterback Josh Allen and Mac Jones of the Patriots are ...

Chicago Bears wide receiver N'Keal Harry is expected to miss up to eight weeks recovering from surgery to repair a ...